While Africa possesses only nine percent of the world’s proven petroleum reserves, the continent remains largely unexplored and may well be the location of significant future oil and gas discoveries. A study produced by the U.S. Department of Energy projected that African oil production would rise 91 percent between 2002 and 2025. In 2006, 22% of U.S. crude imports came from Africa, exceeding imports from the Middle East and nearly doubling the amount of U.S. oil imports that came from Africa in 2002.

Opportunities for investment abound beyond oil in the energy sector of emerging markets. African and Caribbean governments have engaged in liberalization and privatization of the energy sector in order to attract foreign investment and secure modernization and expansion of dependable power. Prospects in biofuels, hydroelectricity, natural gas and other alternative energy sources also await investment.

GoodWorks has worked in Africa to achieve the privatization of state-run electricity and telecommunications facilities. Working in cooperation with PricewaterhouseCoopers, and the government of Canada, we submitted the successful bid to execute the divestment of a state-owned electric power company and telecommunications facilities to encourage efficiency and attract foreign investment. 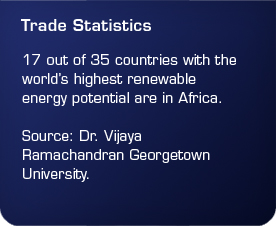