Today, tourism constitutes over 10% of foreign exchange earnings in more than half of African countries for which data are available. In 2006, the international tourist arrival in the Sub-Saharan Africa grew by 11.1%. This growth was the second highest globally. Countries such as Tanzania, South Africa, Senegal and Ghana have invested heavily in the tourism industry. It is estimated that international tourism to the continent will continue to increase over the next decade. 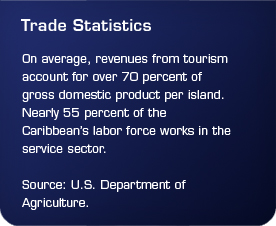